I missed this so much! Getting back to the making of games - from scratch. And that means I get to build from the ground up what the world of DarkSceneGames will be like. In order to do that, I like to have a few things set in place...
I don't have many pet peeves, but there's something that always irritates me. When you're trying to mix and match components within a creativity game or app and you put two items together that look like they have the same color but really don't? They may be brown, but not quite the exact same brown. And it doesn't differ enough to be a contrasting brown either. So it ends up looking like a failed attempt at making something match instead of mixing things up. I can be nitpicky like that. But I don't want our games to have that problem! It's definitely fine in real life. Please don't let something this trivial consume or concern you. Unless you're being A+ stylish. In which case, wow! 😲✨ 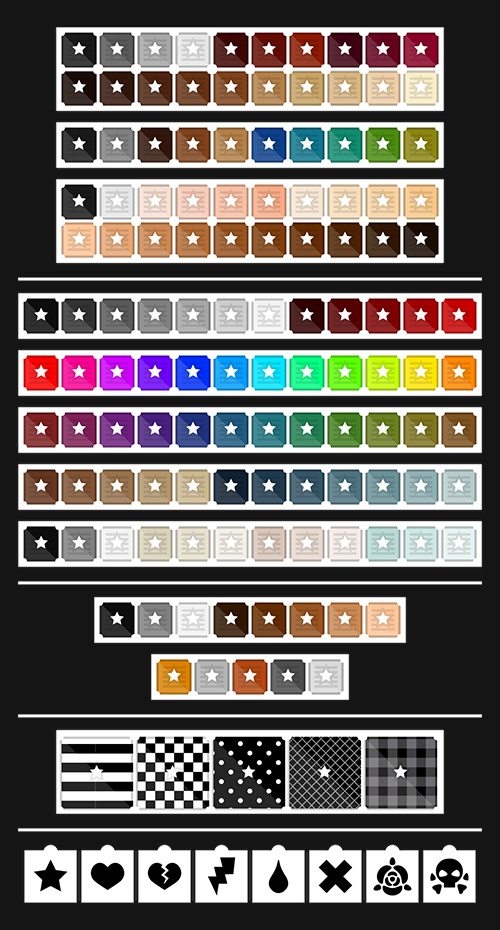 This is why I am paying particular attention and care to the making of reusable assets. To have color palettes and various options to play with when creating. Above is a peek into some of the basics we'll be adding. And over time, I intend to keep making more to add. I am so eager to keep at it!

Now, some of you may wonder... If you're going to keep adding stuff, perhaps infinitely, why not just let the players make their own color palettes, patterns, and symbols to use in-game? That may be a future feature! But regardless, I'll be facilitating these because that's part of the fun. Actually, that's what this is all about. And not everybody wants to go full-mode designer or illustrator when just trying to mess around and enjoy a game or use an app to make things quicker and easier for them. (It gets tiring even for me.)

So here's to the first steps of bringing DarkSceneGames to fruition, the making of reusable assets! 🎉
A few adjustments may be done to these before they're set in stone, as we test them together and with other graphics, but that's how we're starting out. If you're a former DarkSceneGames player, you may recognize some of these. 😀

Newer Post Older Post Home
After being dead for a decade, coming back to life, and being on and off, DarkSceneGames will continue its world-building!
Tune in to see new content being added every Saturday at 2PM (GMT-4).
The 2022 September-December season is barely setting up the base.
Much coming over time!

Join our mailing list to receive our updates and more directly into your mail. Also let us know what you'd like to see. Anything or something in particular?