Hey, all! Guess what. I was the type of kid that, when there was no one to turn to, I turned to music. And that’s something that most people can relate to. Some of us just happened to need it more than others and make a bigger deal out of it.

This game portal began thanks to music. More specifically, what got called EMO music. Because of the culture and style that emerged from it. It gradually expanded to cover more, but EMO was what brought it into existence. So, let's dedicate an article to it...
What is EMO?
EMO (or Emo/emo) is short for ‘Emotional’. It is a label that got attached to a genre of music that delved further into the emotional realm and its expression, derived from rock and punk and mixed into pop. Consequently, those that were drawn to this genre and reflected it in their lifestyle choices would as well be called emo. However, it wasn’t long before it became a derogatory (or simply casual) term for anyone experiencing and/or showing emotion.

Legend says that the music genre started in the 80s but, personally, I came to know it around the year 2000. With songs like Jimmy Eat World - The Middle, which made it into the mainstream (speaking about not being mainstream) and made my teenage years more tolerable. Other songs like Green Day - Boulevard of Broken Dreams and Avril Lavigne - I’m With You would also accompany me as I walked or sat around with my headphones on like a typical emo kid would. And eventually, a band that was initially making lighthearted hits, threaded into murkier waters with blink-182 - Adam’s Song. But I’ve never quite liked to dwell for very long in sadness, lest it’d consume me, and sometimes this leads to resonating with ironic and sarcastic songs such as Lostprophets - A Town Called Hypocrisy, as genuine happiness is not something that you can simply switch on. 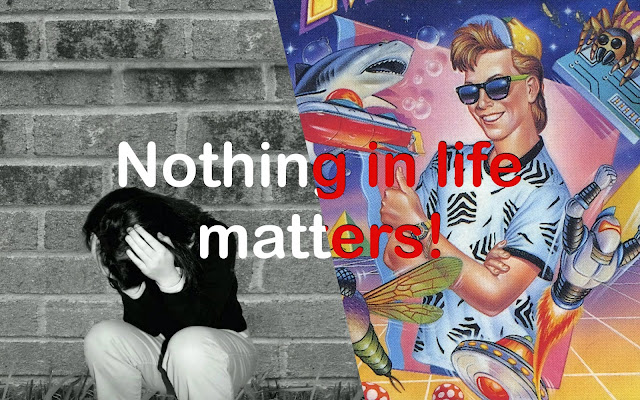 It’s kind of like this Nihilism meme that I later came across. You go far down enough that hole of questioning meaning and significance and you may turn into a nihilist. Then, if you manage to come back out of it, you may call yourself a "post-nihilist". Where, yep, you discovered that “nothing in life matters” but you don’t oughta mope about it. Maybe you’ll find what makes life worthwhile after all and have more arguments for why and how it matters rather than getting caught up in arguments that tell you that it doesn’t - finally becoming able to recognize and live a life that is fulfilling and makes sense for you.

Naturally, many people would be concerned or even opposed to even taking a peek into that abyss. And that’s valid. You don’t come out the same person from it. You may not even come out at all.

When I was running the portal in the past, making and curating emo-themed content for it, I received e-mails that ranged from having genuine worry to violent rage in them. But for the most part, I could discuss and debate the topic. Basically concluding that responsibly providing an atmosphere and outlet was important and did more good than bad (or “bad”). And nowadays, that’s become more evident for everyone. Repressing and denying IS harmful to you all!

Besides, it didn’t have to be that deep. Many people mostly enjoyed the culture and style of it, not being so existential about it. You’d call them emo posers but, as long as they weren’t harming anyone, what’s really the problem? It’s okay to relate and to belong, or just to appreciate, even when you’re not as hardcore about something as others can be. So while there were emo songs so unhinged that I can’t even put them in here, there were also lighter and more optimistic ones like Lillix - Tomorrow. To the point where it can be argued whether or not they're emo enough to be considered such.

What about the EMO look?
And as this portal focused on looks, can’t go without bringing them up. Emo looks were mainly characterized by wearing black clothes, plenty of black eyeliner, silvery instead of golden accessories, and seeming as though you hadn’t seen sunlight in months. Alternative hairstyles and the (in)famous skinny jeans were integrated into it. And vibrant colors soon joined the aesthetic. So Emo looks could go from attempting invisibility to wildly standing out. There’s also the rebellion of mixing and matching whatever you personally liked regardless of how “inappropriate” it looked, which often resulted in much layering. E.g. What you see in Skye Sweetnam - Number One. And of course, worn out and ragged items are totally allowed.

So was EMO just a phase?
There’s the running joke that parents couldn’t wait for their children to grow out of it, to which they’d cry out, “It’s not a phase, mom!” But truth be told, it’s something that washed over many of us at the time and we could identify with it for one reason or another. I’d see it as an art movement that helped break free from limiting standards by coming at full force and then fading out. How many of you cried listening to Simple Plan - Perfect? Nevertheless, some of us still find ourselves in our element with it or have it as an essential part of who we are. So it’s not “just a phase” to everyone. Besides, over a decade later… *Whispers* Emo Is Not Dead.

In any case, this was merely an excerpt of my ride…
How did it go for you?
- With you, P.

Newer Post Older Post Home
After being dead for a decade, coming back to life, and being on and off, DarkSceneGames will continue its world-building!
Tune in to see new content being added every Saturday at 2PM (GMT-4).
The 2022 September-December season is barely setting up the base.
Much coming over time!

Join our mailing list to receive our updates and more directly into your mail. Also let us know what you'd like to see. Anything or something in particular?